» We interrupt this website to get serious for a moment. Don’t Eat Off The Sidewalk!

We interrupt this website to get serious for a moment.

So i’ve been trying to figure out why I shouldn’t vote for Obama.  Luckily, I have the american people, the real salt of the earth, to tell me why.  Here’s what ive learned:

On the flipside, i’ve been trying to find out why I should vote for Sarah Palin.  Because as a woman, the choice isn’t between Obama and McCain anymore.  No sir.  Here’s what i’ve gotten for that:

Honestly, I am pretty appalled and embarassed by that video above.  I know that there’s idiots everywhere and that they do not speak for the nominees, but I don’t think I want to be in the same group that yells ‘commie fags’ and tells a guy that his friend should’ve paid double for her rape kit, when he asks the crowd what they think of Sarah Palin signing off on making rape victims in Alaska pay for their own rape kits.  You can make fun of the way she talks or how she can’t seem to answer a single question that she hasn’t prepared for, but as someone who had to go through sexual assault more than once, I cannot tell you how sick that makes me.  It’s hard enough to work up the courage to tell anyone about it, imagine having to pay for it, monetarily instead of just emotionally, spiritually and physically. 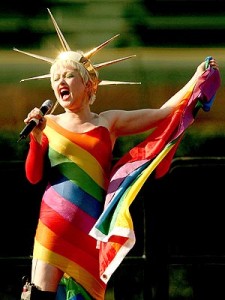 And then she has the nerve to say that women who don’t support other women go to hell?  Don’t get me started on the ‘Real Women Hunt Moose‘ thing.  Jessica Simpson thought that kind of shit was funny too.  Also, anyone stating what ‘real’ women do, no matter who’s doing it, is offensive.  What if I said ‘real women don’t eat dead animals’?  That would offend a lot of people I know.  Or if I was a narrow minded dick, I could say that transgendered women aren’t real women because they don’t have a uterus.  Oh, but what about those women who have had to have hysterectomies?  They don’t have uteruses, are they not real women?  I know, you’re probably thinking that “real” women are born women, and if you are, kindly fuck off.  I have seen some transgendered women in my day who are more womanly than I will ever be.  I can’t even walk in heels!

But despite all of these terrible things, I could never vote for a party that is pro-war, considering the fact that my husband is the one who has to go fight in that war (and oddly, the only pro-war people I meet are the ones who will not join the military.  Go figure!)  He’s coming home soon and i’d like to keep him here, see.  Cause I love him or some junk, and we have already spent half of our marriage apart, due to deployments or training for deployments.  Occasionally people thank me for my ‘sacrifice’, I don’t want to be thanked.  I just want my husband home with me and safe.  I don’t want a guy who says he’ll keep us in Iraq for 100 years to be in charge of our fate, nor do I want his second in command to be a woman who clearly does not care about women.  Also, for someone who brings up his POW status so much, John McCain does not give a shit about veterans.  Okay, he gives a shit 20% of the time.

I will now go back to being vapid and only talking about food and nerdy stuff.