» Vegan Things I’ve Bought That I Love… Don’t Eat Off The Sidewalk!

…because I will not be buying much in the near future! See previous post about Chester and his money-eating, multi-vet-trip hip. He is doing fantastic and his ability to get around on three legs is kind of scary, he just had some swollen foot issues and then his bandage needed to be re-wrapped. We’ve all gotten used to the routine of carrying/being carried up and down the stairs. We moved all of our stuff back upstairs because I was unhappy sleeping on the couch, neither of the dogs were eating right, and Chester seriously spends most of his day upstairs sleeping anyway. I’d rather carry him up and down the stairs than have all of us be miserable. Moving on!

P.S.  This wasn’t all supposed to be beauty products but I kind of went on for so long about zit cream that I decided to cap it at three things.

I’m sure i’ve mentioned it before, but my hormones started going apeshit a few years back and I had to start dealing with seriously itchy, oily, cystic acne (I also now cry off and on for three days before I get my period, it’s lovely).  I had acne in junior high, and the occasional zit thereafter from passing out in my makeup and such.  But cystic acne is AWFUL.  It starts with an itch.  Then the grease comes.  Then a painful bump slowly appears.  And you couldn’t even pop it if you wanted to, because it’s so deep under the skin.  There’s no turning back, no washing your face or using some zap-zit product to beat that little bastard back.  We’re talking a good week, and that’s if you manage to keep your dirty hands off of it (if so, you’re a better person than I am).  Then there’s acne scars which take weeks to fade! 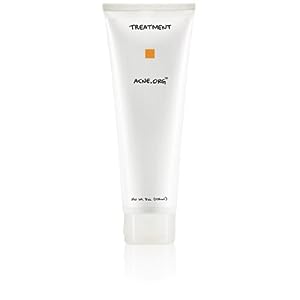 At first, I would just get a single zit on my chin around period time.  I bought some face scrub from Lush, used it 1-2 times a week, and had no problems.  Then it slowly got worse, until I was using half a dozen things to try and help my skin.  Tea tree oil pads, vitamins, jojoba oil as a nighttime moisturizer, eating yogurt like it’s going out of style (and yes I drank plenty of water and all that).  That also worked for awhile, and then about two months ago I realized that despite my best efforts, it…wasn’t working.  I always had a zit.  And again, not a tiny whitehead, but a painful, deep zit that hung around forever.  I was really tired of spackling my face every morning to cover up the redness that takes forever to fade, so I gave in and bought the acne.org treatment (which is benzoyl peroxide, and vegan).  I have had exactly three zits in the last month, all regular small ones, all were from skipping cleaning or forgetting to put this gel on.

Even though I love this stuff and it’s only 2.5% BP, I should note that there are some possible side effects from using it, so if you want to give it a whirl and you’ve never used a BP product, order the travel size first!  The regular tube is eight ounces, which is a loooooot of product to be stuck with if it makes your skin dry or itchy.  I don’t have that problem, but your mileage may vary.  I’ve read that using BP can make your skin ‘age’ faster, but i’d rather have wrinkles than feel like clawing my face off nearly every day.

I do like to try and use as many natural, good-for-me-good-for-the-earth products as possible, and that’s why I love Pumpkin & Poppy Cosmetics.  I’ve mentioned Kristy’s youtube channel before, but this past year she started her own vegan mineral makeup company, and it’s amazing how much she’s grown in such a short amount of time.  She’s gone from just a few mineral foundations to doing themed collections with lipglosses and now eyeliners.  If you’re wary of buying homemade ‘vegan’ cosmetics (thanks, Glittersniffer), Kristy is vegan herself so she won’t be selling you pinks with carmine in them.  But I think my favorite part is that she themes her collections after movies and literature, so instead of trying to pick some random brown out of a product lineup, you can be like, “zomg, I love Labyrinth and I totally want a Bluto inspired eyeshadow!”  Her holiday collection was called Christmas In Gotham, people.  Kristy is also super friendly, interactive, and is very transparent about her ingredients and why she uses each one.

If you buy anything I suggest the Moth Wing eyeshadow, which is a really cool but work-friendly color, or her foundation sample pack so you can figure out which color works for you.  Thanks to the above zit gel, I can now get away with wearing just my mineral foundation without having to polka-dot my face with concealer.  And look at that crazy gorgeous vegan red blush up there!  Hot shit, dudes.

And finally, I give you…my nail polish collection, as it will stand for quite awhile.  After the holidays were over, Ulta and Sally’s both started clearing out the old nail polish collections to make room for the coming spring collections.  And…I went a little crazy.  And maybe doubled the size of my collection.  But i’m a bargain hunter and i’m pretty sure that all of maybe five bottles were bought full price.  Most of my Zoyas I got through some kind of promotion on their site, all of my Sinful Colors polishes were $1 at Walgreens…and most of the holiday colors I got (almost all of the China Glaze and a lot of the ORLY) were $4-2.

P.S.  I found out after my spree that while China Glaze polishes (not counting treatments and some top/base coats) are vegan and they don’t test on animals, they currently can’t confirm that their ingredient suppliers don’t test (but they’re in the process of getting that info to comply with the animal testing ban that’s coming up in the UK).  I think this is a personal comfort thing, on one hand it’s kind of like ‘no one is vegan because mice get killed by the threshers that harvest fields’, but on the other hand, it is just nail polish and not food or what have you. I don’t buy from Essie or OPI because they are owned by parent companies who definitely test, some people think that’s okay because Essie and OPI don’t test themselves.  I don’t think any of their polishes are so amazeballs that I need to buy them over 100% vegan or 95% vegan brands.  Once you get outside of food, veganism can be tricky, just do the best you can.

I tried to arrange them by color (the top is all glitters) for the people who are like, “How many colors do you need?”  ALL OF THEM, FOOLS.  But I am pretty happy with my color selection right now and it will take a long time before I get bored. And here are some random close-ups of polishes that you really need to get all up in to appreciate, plus my fancy storage system: posted: 12 February 2
under: elsewhere on the internet, lists, pictures, products